Born with eidetic memory and a mind that works in ones and zeros, Jules Spenser is labeled a prodigy child before her fifth birthday. Her ability to clearly process information and formulate solutions to problems at an early age became apparent to her teachers, and supporting cast of family. This did not go unnoticed by her grandfather Buck Davidssen, who groomed her from an early age for a career in Medical Nanoscience at his company, The Corporation, which has many divisions under its umbrella, some well-known others not so much…

Jules began taking advanced college level classes at the age of twelve, now she holds master degrees in information technology and quantum physics. Super Intelligent, yet she is most comfortable when she is hanging around her grandpa Buck and the inner core members of his company. This is where she racks up ‘don’t tell Mom’ moments—learning the finer arts of weaponry and hand-to-hand combat. It was here that she also acquired the ability to block out everything happening around her—the Mechanism—she calls it, thereby enabling her to focus her entire moment on the objective at hand. She thinks this trait is a gift, while others see it as her greatest flaw. But Dr. Anna Semyonova, her mentor believes she uses it whenever she strays from her comfort zone, and that it leads to her loneliness—a black hole—limitless, dark, and daunting.

These traits also lead to Jules’ awkwardness and lack of social skills with people her own age. Her ineptness becomes most apparent around members of the opposite sex her own age. Jules just doesn’t care, for her, love and friendship are irrelevant outside her inner circle of family, and ultimately—not necessary to survival. With that said, living on the edge is where Jules excels—she is a champion gymnast and daredevil. At five foot eight with blonde hair and cobalt blue eyes, Jules is lithe yet powerful and displays the grace of a ballerina with the burst of speed of a sprinter.

While interning for her Phd., Jules finds her academic studies turned upside down, and then her life in peril after involving herself in the disappearances of two of her classmates. After the two girls turn up dead and showcased for the world to see, the race begins in earnest to stop the serial killer before he strikes again. Jules is convinced the killer is someone she knows from around the school. But this is no ordinary serial killer. This psychopathic killer seems to have an objective and will stop at nothing to achieve that goal—even if it includes killing Jules if she gets in the way.

Her desire to push the limits of her mind and body with her devil-be-damned attitude is regularly demonstrated with her early morning sped runs with Anna’s Ferrari, where she breaks the 200 MPH barrier on a regular basis.

Good or bad, her eyes are the gateway to her soul. They record everything she sees, forever, and once she locks eyes with an opponent, they’d better watch out, as she is all business.

Enjoy and you decide!

Purchase on Amazon for Kindle

What better way is there to succeed at something than to have a rich grandparent in the same field who becomes your mentor? Jules Spenser is sixteen years old and being groomed to step out on a limb in her grandpa's footsteps, Buck Davidssen. Buck is an American patriot who is gifted in computers and logic, working contracts with the CIA. He works on top secret missions, able to bypass government bureaucracy due to his relationship with the president of the United States. Jules is inexperienced and vulnerable because of her position as a rookie. I kept turning the pages to find her flaws. I had to find her flaws or I wouldn't like the book. She has certain social moments that are awkward. She's daring, wanting to drive the Ferrari faster than she should. Jules gets behind the wheel where a sexy female voice tells her how fast she's going. The opening chapter is a real shocker; not for the faint at heart, a scene that begs for a special victims crime unit. This story has all the makings of a murder mystery thriller, great suspects and interesting victims, perfect for adult readers. Sex, drugs, alcohol, and language take the story to a whole new level. Sandy is a spoiled brat, but she's undeserving of terrible treatment. Tony is a horrible perv; the perfect guy you love to hate. I kept wondering if Jules would end up at the wrong place at the wrong time, or at the right place at the right time, depending on how you look at it. I was on the edge of my seat, wanting to see if Jules would either get tied up in the wrong place or if she would become the hero. The lifestyle of Jules is rich and daring, plus she has the balls to follow in her grandpa's footsteps; she's gifted for sure, but can she handle it? I look forward to reading the next in the Jules Spenser series. 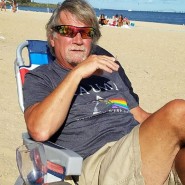